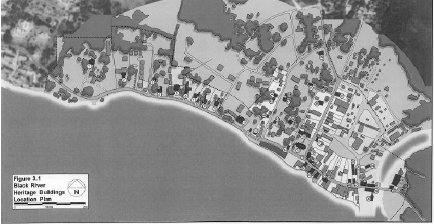 The town of Black River, established close to the banks of the river after which it was named, was designed by the Leyton brothers, three wealthy landowners who were notable business men of the era.

It was established sometime around 1671 and was designated the captal of the parish of St. Elizabeth in 1773, when it replaced Lacovia.

Situated at the mouth of the Black River, where it flows into the sea, the town played an important role in the slave trade, sugar and logwood industry throughout the seventeenth, eighteenth and nineteenth centuries.

It was a thriving town, second only to Kingston, where local farmers transported their sugar, logwood that was used to make dyes, and pimento to for trade or export.

West African slaves were auctioned at Farquharson Wharf. Today, there are only a few surviving wharves that were used to auction slaves.

As a major sea port, it became a major commercial center on the south coast of Jamaica. It's wealth contributed to it being the first town in Jamaica to be lit by electricty in 1893. It was also the first town to have cars in 1903 and telephone 10 years after it was invented.

Waterloo House, believed to have been originally owned by the Shakespeare family who were thought to be related to the famous playwright, William Shakespeare, was the first residence in Jamaica to have electricity. John Leyden, a Scotsman, who subsequently owned it, brought the first car and the first electricity generator to Black River and Jamaica.

The demand for logwood during the 1800s fueled prosperity within the town of Black River. Logwood, a tree from the pea family, has a dark heartwood that yields hematoxylin used for making dyes used within the textile industry. The logwood was harvested in the interior of the parish and shipped to the town of Black river through waterways created by connecting tributaries of the black river. The wood was transported for distances as much as 20 miles, through this interconnected waterway. In 1893-94 the export value of logwood from Jamaica surpassed that of traditional leading crops of sugar and coffee.

The creation and production of synthetic dyes eventually saw the demise of the logwood industry.

In 1850, Jamaica suffered through the Asiatic cholera epidemic that killed ~40,000, people across the island, one tenth of the population. The burial registers in places, only state "Unidentified Persons" followed by the number of unidentifieds. In the last weeks of 1850, the epidemic after devastating Kingston, advanced towards the west of Jamaica. It devastated Black River. Bodies were being buried as fast as possible to try to stop the spread of the disease and to contain the transmission the disease, victims were buried in a specially designated parts of the cemetery.